Rapid reprogramming of transcriptional networks enables cells to adapt to a changing environment [1]. However, most gene regulatory networks (GRNs) are captured and modeled as a static web of interactions. To fill this gap, our studies exploit TIME – the relatively unexplored dimension of gene regulatory networks (GRNs) to uncover the temporal transcriptional logic that underlies dynamic nitrogen (N) signaling in plants [2-5].  Because causality moves forward in time, RNA-seq data from fine-scale time-series experiments are a valuable resource to infer GRN models that can predict TFtarget relationships in out-of-sample data – the ultimate goal in systems biology.  To this end, we generated fine-scale time-series RNA-seq datasets from N-treated plants and used cubic-spline models to identify NxTIME response genes in shoots and roots of Arabidopsis [2].  Using these NxTIME gene sets, we developed a  “just-in-time” approach that enabled us to uncover a temporal cascade of cis-elements underlying dynamic N-signaling [2].  Next, our goal was to identify the transcription factors (TFs) associated with this temporal cis-element cascade. To this end, we inferred TFtarget relationships from the NxTIME dataset using a time-based machine learning method – Dynamic Factor Graph (DFG) – which can infer gene responses at left-out time points [2,3]. To validate our time-based GRN models, we experimentally identified the genome-wide targets of 33 early N-response TFs using TARGET, a plant cell-based system we developed for temporal TF perturbation at scale [3]. These validated TFs include 9 TFs previously associated with in the N-responses in plants, as well as 24 novel TFs which TARGET assays validated to collectively regulate 88% of NxTime responsive genes in shoots and roots [3]. Importantly, we showed that TARGET can capture early and transient TFtarget interactions within minutes of controlled TF nuclear entry for NLP7 – a master TF in the N-response cascade [5]. We then used these validated TFtarget edges for 33TFs in two ways: 1) to develop a “Network Walking” approach which connects TF1TF2in planta (indirect) targets of TF1 [3,4], and 2) in a Precision/Recall (AUPR) analysis to identify high confidence TFtarget edges in our inferred GRNs [2,3]. These high-confidence GRNs now provide the temporal transcriptional logic for ~150 TFs and their targets in the dynamic N-signaling response in Arabidopsis [2,3].  In planta validation studies include master TFs in this GRN, where TGA1 regulates N-dose responsive plant growth via Michaelis-Menten kinetics [5], and NLP7 mediates its downstream in planta responses via early and transient target interactions in the GRN [4]. To broadly enable these approaches in the plant community, we created a platform called ConnecTF (https://connectf.org) that enables users to integrate many different datasets for TFtarget interactions (ChIP, Dap-Seq, RNA-seq) using TF-target data assembled from either Arabidopsis, maize or rice [6].  Automated functions in ConnecTF  enables users using TF-target datasets to perform analysis for including “Network Walking” or to assess the accuracy of any inferred GRN using an automated AUPR analysis [6]. More broadly, these time-based approaches we have developed can be applied to uncover the temporal transcriptional logic for any signaling response system in biology, agriculture or medicine. 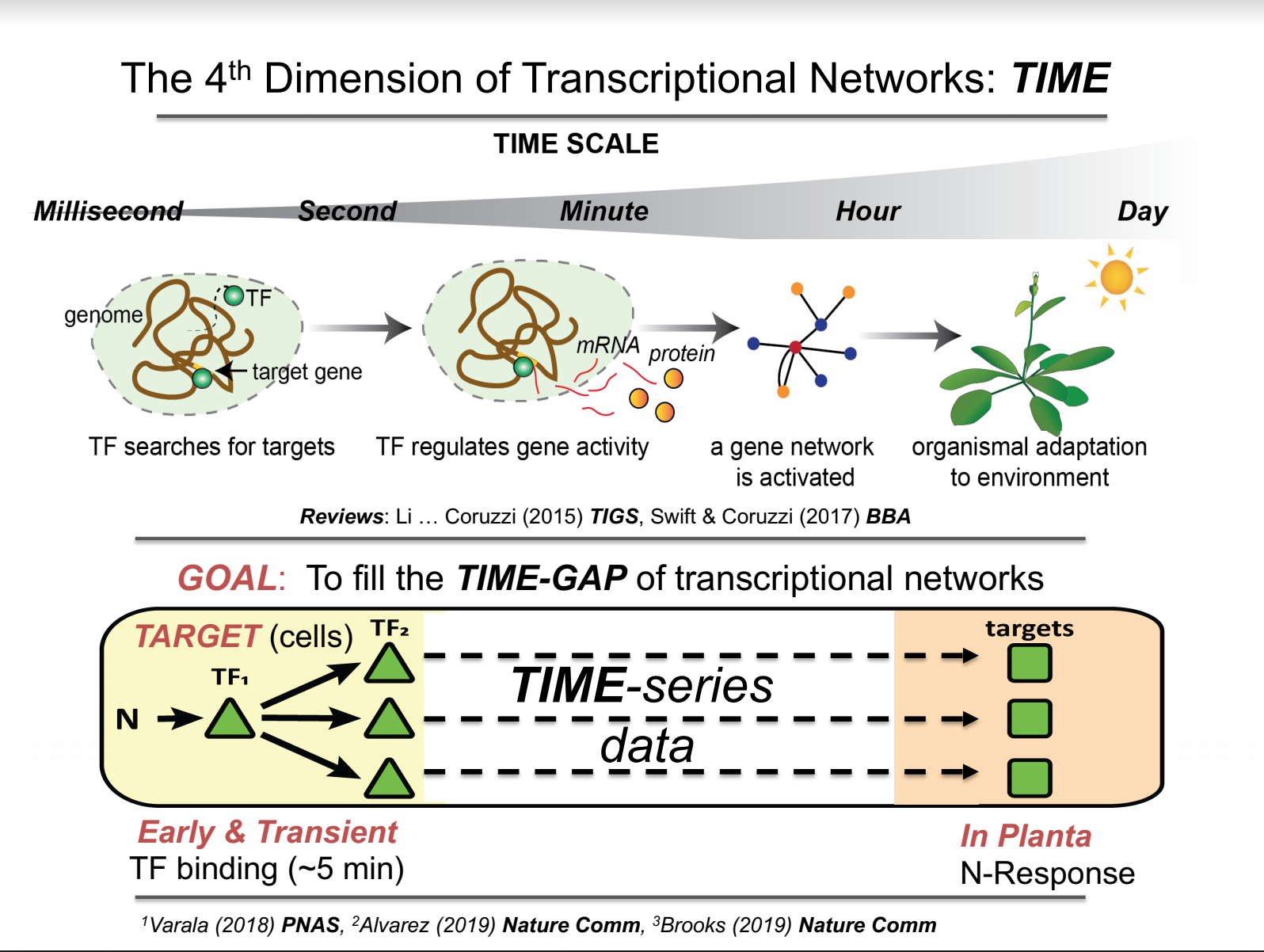 Our TARGET system is published in as part of the Methods in Molecular Biology book series on Transcription Factor Regulatory Networks. (MIMB,volume 2594)

has been cited by PNAS, to be in the top 5% of their Altmetric Attention Score. This score provides an indicator of the amount of attention that a PNAS article has received.  So far, our paper has been written about in 37 news stories from 30 outlets!

NEW PNAS paper published on research led by collaborator Dr. Rodrigo A. Gutierrez, in Chile. Thank you for letting us join you on this 10- year journey!

Gloria Coruzzi is elected into NAS!

Plant Systems Biology lab @nyuniversity. Account run by the people in the lab. Opinions are our own.

In this new paper from the @coruzzilab, the authors use carefully designed experiments to construct evolutionarily-informed machine learning models that predict genes affecting nitrogen utilization in crops.

Can the gene(s) underlying a specific phenotype be accurately predicted!? Click below to learn how machine learning technology can be applied to elucidate key genetic drivers in important crops (and potentially in humans!) @coruzzilab

Anytime 😉. Congratulations @shhuang1 on the paper!